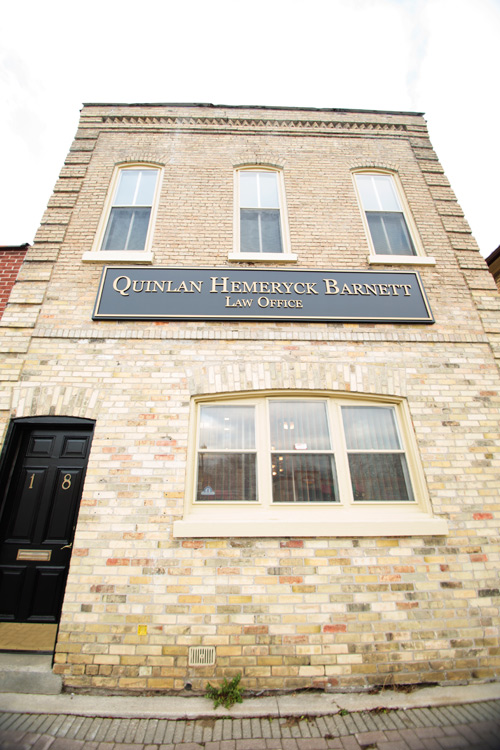 Quinlan & Somerville was founded in 1948 when Arthur Quinlan Sr. and Cameron Somerville opened their office in Strathroy, Ontario. The two practised together as partners until 1952, when each decided to practise as a sole practitioner.

Mr. Somerville purchased the building at 18 Front Street East, from Tadgell’s Farm Equipment Ltd., which had been using the building as a showroom for agricultural equipment.

Mr. Somerville practised alone for the next 32 years, until Charlene and Arthur Quinlan Jr. made him an offer to purchase the practise and building. A deal was struck calling for Mr. Somerville to remain in the newly (re)named firm, Quinlan & Somerville. The three lawyers practised together until 1987, when Mr. Somerville retired.

In March 2012 Charlene and Arthur hired Brad Hemeryck as an associate and in 2013 they hired Jonathon Barnett as an additional associate lawyer. Brad and Jon purchased the practise from Arthur and Charlene on April 1, 2015 and changed the name to Quinlan Hemeryck Barnett.

The law office of Robert G. Waters was founded on April 1, 1974. Mr. Waters practised on his own until 1976 when he entered into a partnership with George Sinker. In 1978, the partnership purchased the building at 72 Frank Street.

In 1990 each lawyer decided to continue their practises as sole practitioners.

Mr. Waters practised alone for the next several years until he began hiring associates. In January of 2014, he hired Andrea Bezaire as an associate lawyer. Rob retired January 1, 2019 to spend more time with his family and grandchildren.